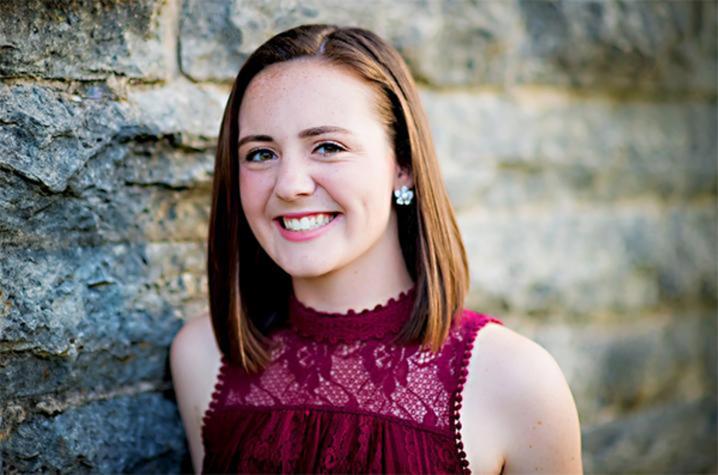 LEXINGTON, Ky. (March 16, 2022) — Throughout March for Women’s History Month, the University of Kentucky is spotlighting Women Making History. These women are leading their fields of research, crossing traditional academic boundaries and impacting Kentucky’s most pressing challenges, including opioid use disorder treatment, aging and Alzheimer’s, water and air filtration, environmental impacts on health and suicide prevention.

They are mentoring the next generation of women scientists and scholars, curating stories and creating artworks illuminating who we are. Their work and voice shape the University of Kentucky.

On this “Wildcat Wednesday,” UK celebrates Lauren Hudson, a junior majoring in neuroscience and biology, from Villa Hills, Kentucky.

When Hudson was 4, her mother was diagnosed with breast cancer. While her mother is now 16 years cancer-free, the doctors and researchers that contributed to her recovery left a lasting impact on Hudson, ultimately leading her to UK to pursue an education in the medical field.

Hudson’s passion for research started her freshman year, when Nathan Vanderford, the assistant director for research in the UK Markey Cancer Center, reached out to her about participating in his research program. His program focuses on increasing cancer literacy rates in Appalachian youth by integrating cancer education in middle and high schools.

“It wasn’t until I began my research on cancer literacy that I realized I was in a unique position to truly make a difference in the cancer disparity in Appalachia Kentucky through cancer education,” Hudson said. “Kentucky faces the overall highest cancer incidence and mortality rates in the country, with a large percentage of the cases coming from the Appalachian region. This disparity is caused by poor health behaviors, such as smoking and obesity, and low cancer literacy rates. Our research strives to increase the cancer literacy rates in Appalachian youth by incorporating cancer education into secondary schools.”

Hudson is now the first author on two publications involving cancer education and literacy in secondary schools, one featured in the Journal of Cancer Education and the other in Southern Medical Journal. She also has written two papers on training students for cancer-focused careers, featured in the Southern Medical Journal and Journal of Appalachian Health. Last year, she was named UK Intern of the Year based on her work with Vanderford.

“I am not aware of any other undergraduate student that has had such exceptional research success,” Vanderford said.

In addition to her research participation, Hudson is a Singletary Scholar, a member of the club soccer, writes for the Kentucky Kernel, is part of UK NeuroCats and is a member of the Alpha Phi Omega service fraternity.

Outside of her research, Hudson has also written several novels for young adults, and was featured at the Kentucky Book Festival at UK her freshman year.

After graduating, she plans to attend medical school.

Look for more Women Making History stories, like Lauren Hudson’s, in UKNow on “Wildcat Wednesday” and every day on UK Research social media (@ResearchKY on Twitter and Facebook) throughout the month of March.

The University of Kentucky is increasingly the first choice for students, faculty and staff to pursue their passions and their professional goals. In the last two years, Forbes has named UK among the best employers for diversity, and INSIGHT into Diversity recognized us as a Diversity Champion four years running. UK is ranked among the top 30 campuses in the nation for LGBTQ* inclusion and safety. UK has been judged a “Great College to Work for" three years in a row, and UK is among only 22 universities in the country on Forbes' list of "America's Best Employers."  We are ranked among the top 10 percent of public institutions for research expenditures — a tangible symbol of our breadth and depth as a university focused on discovery that changes lives and communities. And our patients know and appreciate the fact that UK HealthCare has been named the state’s top hospital for five straight years. Accolades and honors are great. But they are more important for what they represent: the idea that creating a community of belonging and commitment to excellence is how we honor our mission to be not simply the University of Kentucky, but the University for Kentucky.