Arts and Sciences Professor Emeritus Edward Stanton’s recently published book "Wide as the Wind" has been named by the Independent Book Publishing Professionals Group as one of the best indie books of 2017.

Kirk examines the contrasting circumstances surrounding the inception and fate of two great colonial Mexican libraries to illuminate the gender politics of knowledge at play in the intellectual culture of seventeenth-century New Spain. Sor Juana Inés de la Cruz, cloistered nun and famous writer, used her vast collection of books to challenge women's exclusion from scholarly culture while Bishop Juan de Palafox y Mendoza, powerful colonial political and religious figure, placed his library at the center of a powerful educational institution which promoted the production and dissemination of knowledge as masculine. 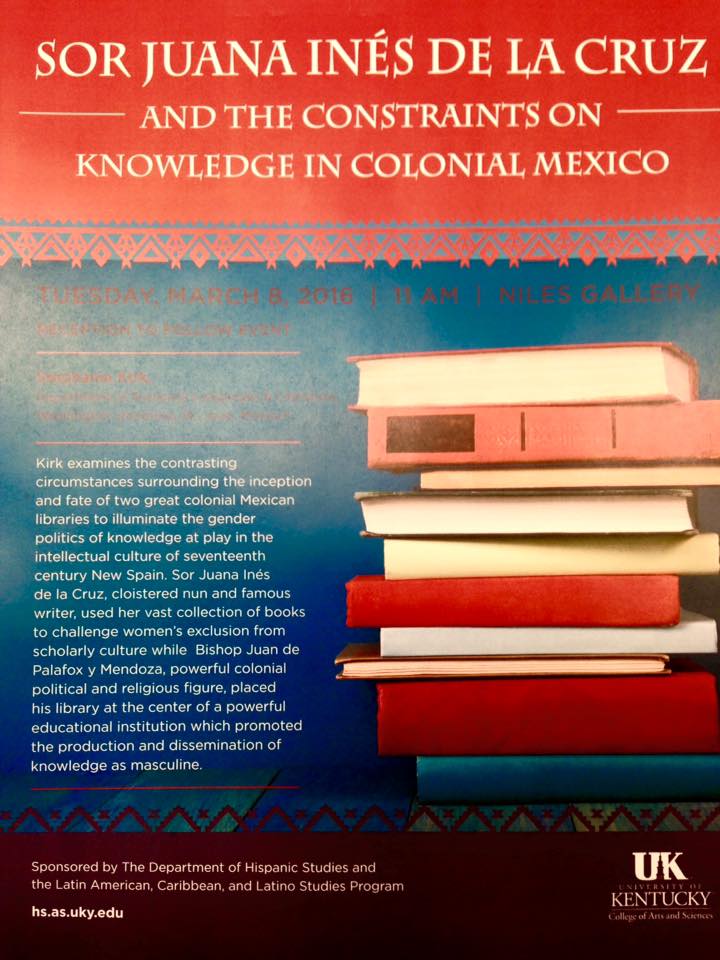 Wicked Souls and Bodies: Evil Spirits, Sexuality, Gender, and Violence in the Lore of the African Diaspora

While the African diaspora generally describes the dispersal(s) of African-descended peoples throughout the world from modernity to the present, it demands the sighting of various contexts, causes, results, and memories.  This symposium’s focus on the African diaspora as articulated a transatlantic contexts provides a platform that underscores diversity and the human condition in a national and transnational manner. The cultural, linguistic, ethnic/racial, and generational dynamics of the Black Atlantic provide a fruitful intellectual context for exploring the roles of problematic acts of agency in oppressive spaces.
This mini-symposium examines folktales and folktale-like stories as sites of both abjection and healing.  This symposium will study stories that illustrate how individuals protect their identity and bodily integrity. We will discover how storytellers from the Americas have responded to the effect of colonization and colonialism through oral and literary works that underscore the cultural and psychological characteristics as well as the resilience of their communities. Presenters will examine the carnal violence and brutality associated with sex and gender in folktales and fairytales from the Americas. In so doing, this mini-symposium will put European and African folklore in conversation with the New World’s oral and literary traditions. For instance, in French Caribbean lore, whenever one speaks about evil spirits, one speaks about pacts with the devil and magical practices for white or black magic. Syncretic re-appropriations of Catholicism are often at the heart of measures taken against evil practices. In addition, the nocturnal violation of female bodies by male evil spirits (incubi) resembles the supernatural assault tradition called cauchemar or witch-riding in southwest Louisiana. The Caribbean vampire is often an old woman (a soucougnant or soucouyant) who, at night, suckspeople’s bloodseeking vital energy and, in so doing, recalling the West African witch. Moreover, the consequences of sexual violence do not spare men either.  In French Caribbean folklore, the diablesse (She-devil) often eats men’s hearts while succubi (or other devil spawns) petrify them to death. The dialogues between the various spaces are intriguing to say the least.
Rationale for the conference
Globalization in the twenty-first century has both exposed and increased tensions around the construction of diverse communities. Now, more ever, the world’s great variety and diversity prompt heated discussions pertaining to class, race/ethnicity, nationality, gender/sex, urban/rural, religious affiliation, etc. Each of these societal categories —along with the others— enhances the ways that students, faculty, administration and staff see and envision themselves as part of this vibrant and productive community that is the University of Kentucky.
To foster campus dialogue within Arts & Sciences and beyond, to promote the critical study of community building, and to open new perspectives in discussions around selfhood and otherness, the “Wicked Souls” intends to be a mini-symposium that deploys Caribbean studies and particularly folktales and marvelous stories and their connections to religious or spiritual practices as a platform to explore how communities see others and envision themselves. Indeed, in the French Caribbean, for instance, whenever one speaks about evil spirits, one speaks about pacts with the devil and Quimbois (magical practices for white or black magic; also considered as medicinal and healing practices). Catholicism (or syncretic re-appropriation of it) is at the heart of measures taken against evil practices. As a part of the implementation of the University Strategic plan for Diversity and Internationalization, this symposium aims to increase the profile of Caribbean and Black Atlantic Diasporic Cultures here at the University of Kentucky and inform colleagues beyond our walls of this growing field of inquiry on our campus.
Some of the questions this mini-symposium will address include:
•       gender and race relationships in colonial and postcolonial societies.
•       the historical and cultural contexts that have contributed to the formation of the lore of the African Diaspora in the Americas.
•       how the eroticized bodies bears traces of its social, political and cultural codification.
•       the relationship of domination, power and violence between men and women in the Americas.
•       religious and spiritual practices in diasporic spaces
•       challenge dominant ideologies about what folklore means in the Americas.
•       explore notions of self, gender, race and ethnicity as shifting social constructs while studying the male and female body as a reflection of colonial  and postcolonial societies in the Caribbean.
It is within this framework that this symposium considers theories associated with psychoanalytic and fairytales studies, postcolonial studies, and trauma studies as ways of conceiving and analyzing the construction of intercultural and diverse communities. Though presenters will examine stories from the African Diaspora, members of the audience will also be invited to ponder the extent to which trauma born out of colonial rule has impacted inhabitants of the Caribbean and the Americas, irrespective of gender or ethnicity.
Date:
Wednesday, February 3, 2016 - 05:00 pm - Wednesday, February 3, 2016 - 07:00 pm
Location:
ine Arts Library, Study Room 1 (upstairs)
Tags/Keywords:
caribbean
hispanic studies
modern and classical languages
latin american studies

Trails and Tribulations: Chatino conceptions of the dead

The Chatino people from Oaxaca, Mexico, believe that the departed begin a new life that is parallel to the world of the living, known in the Chatino language as JlyaG.  In order to reach JlyaG, the recently departed must traverse on a treacherous path that goes through mountains, rivers, and towns. JlyaG  is a metaphysical place that corresponds to an actual location in our plane of existence found towards the northern part of the Chatino region in the municipality of Zenzontepec (coordinates 16° 32′ 0″ N, 97° 30′ 0″ W).
Prayers, stories, myths, place, and performance are crucial elements in the practice and belief of the Chatino concept of the dead. In the Chatino town of San Marcos Zacatepec, when an adult dies, family members call an expert to perform a speech called TiA SuAKnaA or ‘prayer to the dead.’ The TiA SuA KnaA is recited at the dead person’s wake. The goal of the speech is to guide the dead through the trail of the dead and to encourage them not to come back and taunt their family members, friends, and community members either by showing up in individual’s dreams or appearing as a ghost quB tiqE.
The departed also need to demonstrate endurance, agility, and artistic skills. For example, when they reach a place called SaA tqenA, located in the town of Cieneguilla, San Juan Quiahije (coordinates 16.3000° N, 97.3167° W), the dead have to dance. The dead men, in addition to dancing, must whistle or sing. Women only have to dance. Hence, Chatinos believe that artistic abilities such as dancing, whistling, and singing must be learned and practiced during the course of a person’s lifetime. This presentation will discuss these aspects of Chatino conceptions of the dead and describe the verbal art of the rituals involved as the recently dead move on to JlyaG.
Date:
Wednesday, January 27, 2016 - 12:00 pm - Wednesday, January 27, 2016 - 01:30 pm
Location:
Niles Gallery (Fine Arts Library).
Tags/Keywords:
linguistics
hispanic studies
latin american studies 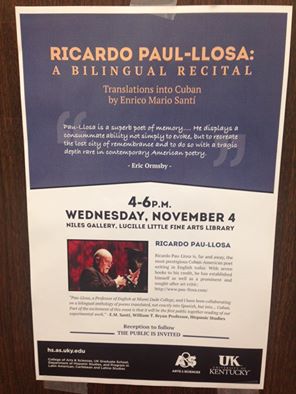 This November 4th at the Niles Gallery @ 4PM join us for a Poetry Recital by Ricardo Pau-Llosa, the most prominent Cuban-American poet today!

A new assessment of the lasting impact of Hernán Cortés and the Spanish Empire’s conquest of the Aztec Empire will be discussed at “New Perspectives on Spanish Conquest and Empire: From the 16th to the 21st Centuries.” 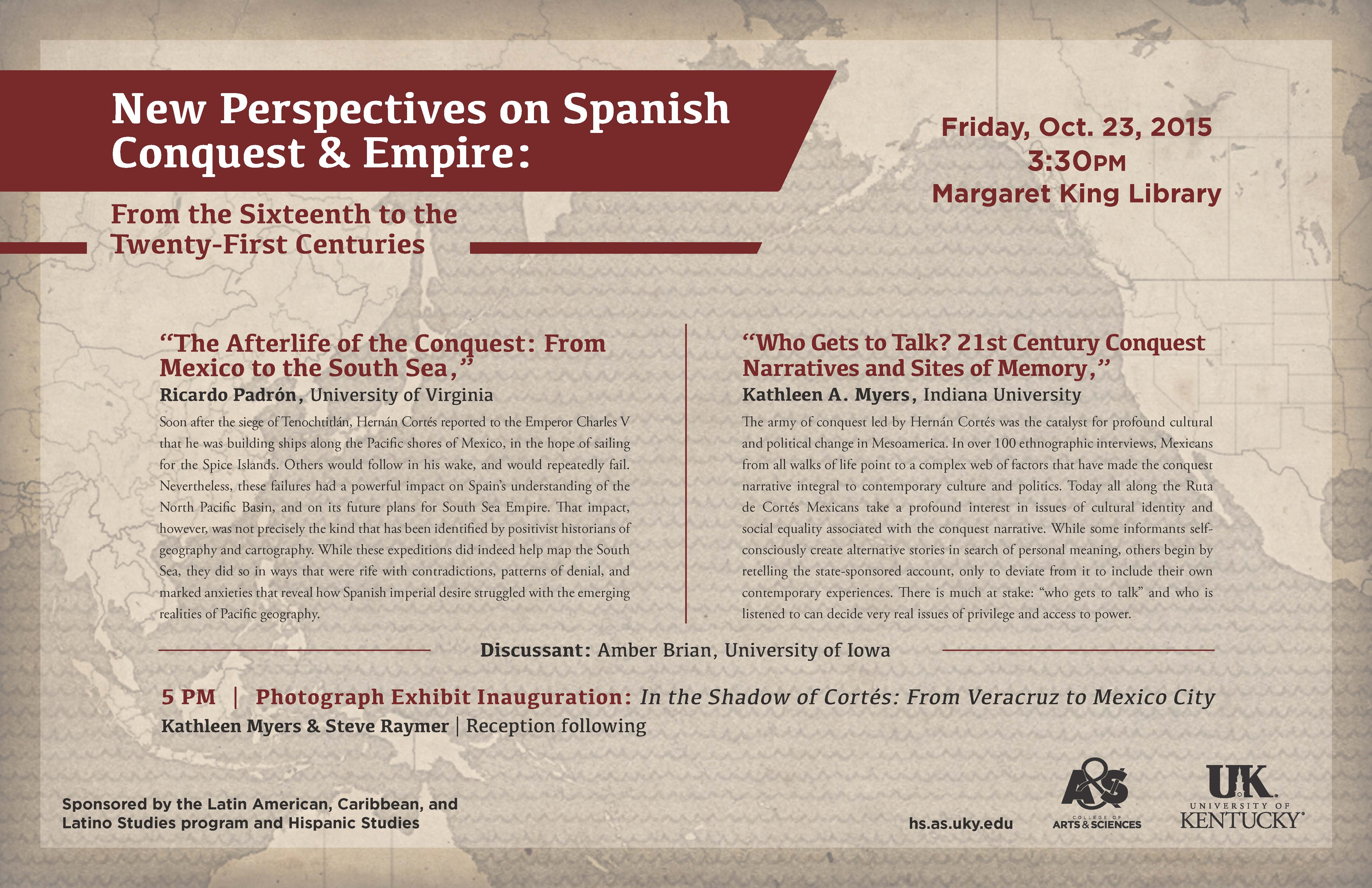