Bringing Japanese Culture to the Heart of the Bluegrass: A Kyogen Lecture

Free and open to the public.
Kyogen is a form of classic Japanese comedic performance which seeks out humor and laughter in people’s daily lives. In collaboration with the Noh Society in New York, the Japan Studies
program will host a program consisting of three Kyogen activities—a workshop, a lecture, and a performance—on September 26, 2017. All activities, directed by three noted Kyogen performers from Japan (Daijiro Zenchiku, Noriyoshi Ohkura, and Noboru Miyamoto), are certain to bring out wonder, joy, and laughter. This program is made possible by the generous support of the Japan Foundation, New York and the UK Department of Modern and Classical Languages, Literatures & Cultures.
Date:
Tuesday, September 26, 2017 - 02:00 pm - Tuesday, September 26, 2017 - 03:15 pm
Location:
Patterson Hall Room 218
Tags/Keywords:
japan studies

By Gail Hairston
(March 11, 2016) - Excerpts from Doug Slaymaker’s translation of Furukawa Hideo’s latest book “Horses, Horses, in the Innocence of Light” were published on the online journal Words Without Borders.
The publication is in commemoration of the 3.11 earthquake/tsunami/meltdown disasters four years ago. The book is the account of how one man, one nation endured an unbearable tragedy.

The painful memories of World War II continue to adversely impact the political climate of Asia, especially between Japan and China and South Korea. In fact, many scholars still refer to the worldwide conflict as the Asia-Pacific War.

They participated in the annual Kentucky Japanese speech contest that took place in Norsworthy Auditorium, located next to the Fayette County board of education building, on Saturday, April 18, 2015.

Excerpts from Doug Slaymaker’s translation of Furukawa Hideo’s latest book “Horses, Horses, in the Innocence of Light” will be published on the online journal Words Without Borders today and Thursday.

My Map is Better than Yours: Competitive Cartography in China/Japan Territorial Dispute over Senkaku (Diaoyu) Islands in East China Sea

This event is sponsored by the Confucius Institute, Department of Geography, International Studies and Japan Study Program, and China Program in the College of Arts and Sciences.

True Songs: A Film Event Marking the 4th Anniversary of the 3/11 Disasters 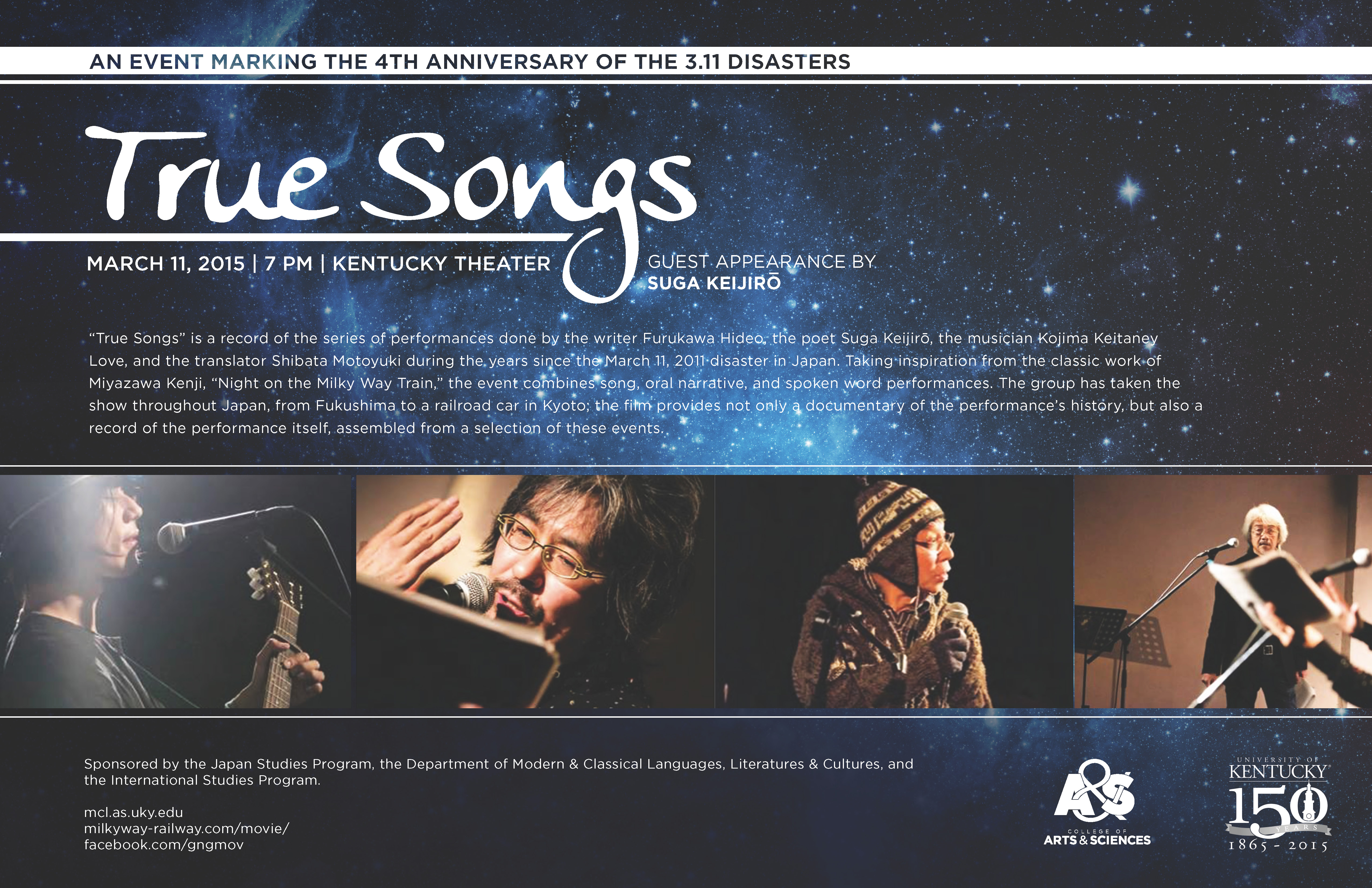 True Songs is a record of a series of performances by a group of Japanese artists during the years since the triple disasters of March 11, 2011. Taking inspiration from the classic work by Miyazawa Kenji Night on the Milky Way Train, the event combines song, oral narrative, and spoken word performance. The group has taken the show throughout Japan, from Fukushima to a railroad car in Kyoto. One of the artists, Suga Keijiro, will be in attendance.

In the wake of the triple disasters of March 11, 2011 which devastated the Tohoku region of Japan with a massive earthquake, an enormous set of tsunami, and the catastrophic failure of the Fukushima Dai-ichi nuclear reactor, both Japanese and foreign observers struggled to make sense of these events.  Bestor examines some ways in which Japanese culture frames disasters, and based on fieldwork in Tohoku in 2011 and 2012, how local meaning-making unfolds.

Dr. Bestor earned his Ph.D. from Stanford University and is Professor of Social Anthropology and Director of the Reischauer Institute of Japanese Studies  at Harvard University. His books include: Routledge Handbook of Japanese Culture and Society (edited with Victoria Bestor and Akiko Yamagata, 2011), Doing Fieldwork in Japan (2003), and Tsukiji: The Fish Market at the Center of the World (2004).

The Anthropology Graduate Student Association (AGSA) invites you to join the Department of Anthropology for our 13th annual Distinguished Lecture Series featuring cultrual anthropologist Dr. Thedodore Bestor. This event is free, and open to all.