The eye is an extension of the central nervous system. Defects during ocular development can lead to severe vision problems. My research focuses on the role of sox4 in the regulation of ocular morphogenesis and retinal neurogenesis using zebrafish as a model organism. Sox4 is a member of the group C SRY-box containing transcription factors. It has been reported to regulate retinal neurogenesis in mice and Xenopus. Zebrafish have two co-orthologs of the mammalian sox4 gene: sox4a and sox4b. Their functions during zebrafish ocular development have not previously been elucidated.

I have shown that sox4a and sox4b transcripts are expressed in the developing zebrafish brain and periocular mesenchyme but not in the eye prior to 24 hours post fertilization (hpf). Their expression initiates in the retina by 36 hpf and thereafter spreads to the ganglion cell layer (GCL) and inner nuclear layer. I found that morpholino-mediated sox4 knockdown caused ocular coloboma (failure of the choroid fissure closure), ectopic cell proliferation and reduced numbers of rod photoreceptors. In contrast, sox4 overexpression caused cyclopia (failure of the optic field to segregate), while retinal neurogenesis was normal. Based on the fact that elevated Hedgehog (Hh) signaling is known to cause coloboma, and cyclopia can be caused by reduced Hh activity, we hypothesis that sox4 regulates ocular development upstream of the Hh signaling. In support of this hypothesis, real-time RT-PCR revealed that expression of the Hh ligand ihhb was strongly upregulated in sox4 morphants, and expression of pax2a in the optic stalk, which is induced by midline Hh signaling, was expanded in sox4 morphants. Treatment of sox4 morphants with the Hh inhibitor cyclopamine or co-injection of an ihhb morpholino rescued the coloboma phenotype and the reduction of rod photoreceptor.

Specific aim I: Determine the critical period when sox4 is required for choroid fissure closure.

Although the coloboma phenotype in sox4 morphants scored at 48 hpf, it is likely to be the consequence of much earlier developmental defects because cyclopamine treatment as early as 5.5 to 13 hpf can rescue it. To find the critical period for the requirement of sox4 in choroid fissure closure, photo-morpholino (photo-MO) will be used for the temporal control for sox4 knockdown. Photo-MO incorporates a photo-sensitive subunit which can be cleaved by 365 nm UV light. Sense photo-MO will be used in this study, which binds to the antisense sox4 MO preventing it from binding to sox4 transcript. When the sense photo-MO is cleaved by UV light, it releases the antisense morpholino, which then blocks the translation of sox4. This experiment will allow me to control the onset of sox4 knockdown, to define the critical period when sox4 is required for choroid fissure closure.

As a transcription factor, if sox4 transcriptionally regulates the expression of the rod lineage genes, I would predict that sox4 functions cell-autonomously in rod specification. On the other hand, if the rod neurogenesis defect in sox4 morphants is associated with sox4 regulation of Hh signaling, I would predict that sox4 regulates rod differentiation in a non-cell-autonomous fashion. To address this question, I will conduct blastula stage transplants between sox4 morphant and control embryos. Control and sox4 morphants on XOPS-GFP transgenic background will be divided into two groups each and used for generating sox4 chimeric embryos. Donors will be labeled with lysine-fixable Texas Red Dextran. Host embryos will be selected at 24 hpf for Texas Red Dextran labeled cells in the retina. Chimeric embryos will be fixed at 72 hpf and 4 dpf, and cryosectioned. Since both donor and host embryos are on the XOPS-GFP genetic background, rod photoreceptors can be detected by GFP expression. Additionally, because all donor cells are labeled with Texas Red Dextran, rods derived from donor cells will exhibit colocalization of GPF and Texas Red, thus showing yellow color. The number of rods for each color in all groups will be counted.

This research addresses a gap in our understanding of the complex network of gene regulation controlling eye morphogenesis and photoreceptor neurogenesis. The ultimate goal is to provide valuable data that will lead to genetic screen and therapeutic treatments for patients who suffer from vision defects. 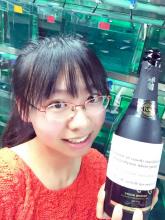