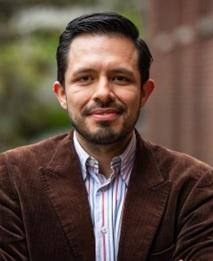 Dr. Hugo Reyes-Centeno is an evolutionary anthropologist specializing on the emergence of modern human anatomy and behavior over the last million years. In addition, he conducts inter-disciplinary research on human biocultural diversity and the study of natural and cultural heritage worldwide. Prior to joining the University of Kentucky in 2020 as Assistant Professor of Anthropology, he served as Scientific Coordinator and co-founder of the Center for Advanced Studies “Words, Bones, Genes, Tools” at the University of Tübingen (Germany), where he also completed a dissertation in the Institute of Archaeological Science and the Senckenberg Centre for Human Evolution and Paleoenvironments. His research has appeared in Cell, PNAS, Journal of Human Evolution, and PLoS Genetics, among other venues. He has performed paleontological and archaeological fieldwork in France, Italy, Peru, the Philippines, and Spain. Currently, he serves as Co-PI of the NSF-funded EduceLab: Infrastructure for Next Generation Heritage Science.

Abstract: Despite consensus on the emergence of anatomically modern humans in Africa and their subsequent dispersal into the rest of the world, the mode and timing of these processes remain controversial topics. In addressing them, data on human anatomical and genomic variation have sometimes generated conflicting inferences. Therefore, approaches that consider both lines of evidence under a common theoretical framework are important for reconciling competing evolutionary models. In this talk, I highlight research that tests competing models of human dispersal out of Africa, which applies quantitative genetic and population genetic methods to anatomical and genomic data. I discuss the caveats of these conclusions, including the influence of admixture between modern humans and other hominins. Furthermore, I examine how these findings align with the known human fossil record and a growing inventory of ancient genomes from archaeological and paleontological contexts. Finally, I review how ongoing field and laboratory projects in Eastern Africa, Southeast Asia, and South America shed light on human evolution, adaptations, and dispersals.